Let me start-off by explaining what MSTest and MSTestV2 are.

MSTest (Microsoft.VisualStudio.QualityTools.UnitTestFramework.dll) – This is the unit testing framework that comes pre-installed when you install Visual Studio IDE (Available through the .Net Framework – GAC)

MStestV2 (Microsoft.VisualStudio.TestPlatform.TestFramework.dll) – This is now the open source version of MSTest. With any open source libraries, there are lots of good contributions but also features do change more frequent. More often, removed (or enhanced in this case). You install this version of MSTest through Nuget.

With that brief description on MSTest and MSTestV2, now comes the question: Why would I reference both MSTest and MSTestV2 in the same test project? Well, there are two reasons; Backwards compatibility and issues exposed in MSTestV2 that is still being worked on.

Ideally, I would ask the developers to migrate directly to MSTestV2 but in this case, I’d like for them to regress any issues they find in MSTest and see what else could break in MSTestV2.

The issue: Referencing both dlls causes collisions and/or conflicts simply because most of the attributes (or All- [TestClass],[TestMethod],etc…) uses the exact same namespace:

With namespace aliases, you can reference multiple assemblies even if those assemblies have the exact same namespace

Step 1: Provide an alias name at the assembly level.

Go to the properties of each assembly and provide an alias.

Step 3: Refer to the appropriate assembly classes and/or attributes through the namespace alias (variable you created through the “using” statement)

We all rave and talk about TDD (Test Driven Development) all the time. Have you asked yourself these questions?

· “Do my unit tests truly cover blocks (or lines) of code that I’ve implemented?”

· “How do I ensure that specific features (implementation) is doing what it’s supposed to do?”

· “Is there a possibility that a block or line of code that I’ve written is not being touched by my unit tests?”

This post however, I’m not going through the practices and understanding of how unit testing works. There are many resources and literature available for you to look at (just google TDD J). Most of you already know how to do this but I do want to share my experience and practices around unit testing “WITH” code coverage. Have you used code coverage before? If not, let’s start with that.

So, what is code coverage? Simply put: “it is a measure (%) used to describe the degree to which the source code of a program is executed when a particular test suite runs”

We also describe that a program/application with high degree of code coverage, has a lower chance of containing undetected software defects compared to a program/application with low code coverage, again depending on the test suite. It’s easy to produce tons of tests that should cover the code, but we normally measure it. Covering code just means you need quality tests that verifies the functionality of blocked or line code that you wrote (the quantity isn’t that important). Which boils down to, you are not writing “Regression Tests” (validating edge cases and/or test case families) when writing unit tests to measure code coverage. However, you may have requirements to implement certain rules that may touch edge case scenarios. In this case, you write unit tests for those because it’s now a logic/function that you will implement.

Finding the sweet spot! When is “Enough” enough? It’s when you can make changes to your code with confidence that you’re not breaking anything and to me what it means is that you have tested a block of code that has logic and/or implementation in place. As a .Net developer, I come to wonder, how about properties? Specially auto generated properties? Do we account for code coverage numbers for those? My answer to this is No. Auto generated properties or properties in general and by default doesn’t have logic in place. Hence, why write unit tests for something that doesn’t have logic?, Then why measure it through code coverage?

Here, I’ll start off with a project that has a unit test available and some level of functionality. Consider the following unit test.

This unit test validates getting a JSon response from a web api. In this case, a valid public API from Github. For simplicity, I simply want to do an HTTP GET from this web api to get repo’s (Git repositories) from a Github contributor.

Below is the implementation

So far so good, we’ve achieved writing a unit test to validate a response from a public web api as well as ensured that the test we wrote covered 100% of the code implementation.

A problem arises from this. It’s apparent that we have a major dependency in our unit test. Now and days we use and rely on build systems (such as Jenkins and VSTS) to compile, tests and publish artifacts. The practice behind Unit Testing is to ensure that all unit tests executed are de-coupled and not have any dependencies in place.

Besides dependencies, I’m sure by now you’ve realized that there’s no guarantee that every single call you make will be successful so now comes the next cycle of our work, let’s expand the implementation to include a try catch block so at some point we can customize what we want to return or throw back to the user in an event a problem occurs

We start by creating a new test to validate that any exceptions thrown are caught in the catch block. Again, TDD circle of:

Notice that the URL was changed to point to a non-existent URL. We also refactored implementation on the code by adding a try – catch block and with this line: response.EnsureSuccessStatusCode();

Using this method: EnsureSuccessStatusCode() ensures that exceptions are thrown if the IsSuccessStatusCode property for the HTTP response is false. This is my own implementation and I’m sure there are many ways to catch and throw errors/exceptions back to users.

So far so good, I have 2 Unit Tests that:

(Note: The blue highlighted section of the screenshot)

While we’ve satisfied basic principles of TDD + Code Coverage thus far, we’re still left with the point of isolation. Current TDD practice suggests that any unit test when executed should be isolated and no real dependencies should be called upon.

Our Unit Tests still rely on a working API endpoint. This is problematic as we know unit tests are autonomous.

Solution? Mocking/Faking endpoints! The best part I love about TDD is that inevitably your code leads to better design through Dependency Injection and/or Inversion of Control.

Before I go further, it might be worthwhile to talk about Mocking (Faking) and Dependency Injection. I’ll briefly show you how dependency injection works later.

What is Mocking? Mocking is primarily used in unit testing. It is used to isolate behavior of an object or function of what you want to test by simulating the behavior of the actual object and/or function.

There are so many articles, guides and practices around mocking. There are 2 well known mocking frameworks that are used by many developers

1) MOQ – My favorite. Easy to use, open source with many contributors. MOQ is hosted in GitHub and works well in .Net. https://github.com/Moq/moq4/wiki/Quickstart

What is Dependency Injection? If you’ve been practicing TDD, I’m quite certain your code will eventually lead to dependency injection.

“Dependency injection is a technique whereby one object supplies the dependencies of another object. A dependency is an object that can be used (a service). An injection is the passing of a dependency to a dependent object (a client) that would use it. The service is made part of the client’s state, passing the service to the client, rather than allowing a client to build or find the service, is the fundamental requirement of the pattern.”

Let’s go back to our code and will consider dependency injection later.

Unit Tests –CHECK. Code Coverage – CHECK. As I write this post, I’m in route to San Francisco. What a great way to work on TDD and ensure I start mocking at this point. Given that I don’t have any persistent connection to the public API my tests will fail

Luckily, the implementation I decided to use for API request is HTTPClient (built in .Net) which allows me to pass in an “HttpMessageHandler” which therefore I can mock the data.

With a little bit of refactor work: (Again, Red -> Green -> Refactor analogy), Here’s the modified version of the HttpConnectionService class

Here’s a modified version of the Unit Tests:

I passed the first unit test because I was able mock the request however this test doesn’t cover all the code blocks. Code Coverage is at 89.6%. Great progress so far! Note that code coverage % is subjective to the total code blocks developed. Importantly in this picture, the specific Unit Test didn’t go through the exception block. Let’s fix the other tests to validate exceptions are caught. Below is the modified version of the Unit Test to validate exception handling

Why wasn’t I able to achieve 100% code coverage even though the Unit Tests covered the path to all code blocks? It seems that if use certain built .net features (highlighted in yellow) it treats it as an ambiguous state. I would only assume at this point that it’s how code coverage works in Visual Studio and/or the libraries for Code Coverage. In this case, MSTest.

A modified version of TDD circle would show: 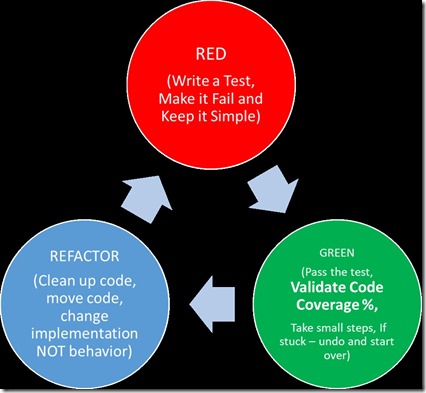 Now let’s expand the code a bit by introducing DI (Dependency Injection) I’ll add an abstraction layer (Façade) so that the user doesn’t call the connection service directly rather call this façade class for working with data. This is a common practice so the façade layer can work with any other business logic or requirement. Here’s the new class implementation:

I used DI to pass the IConnectionService in the constructor. When I do this:

1) I tell the object (constructor parameter) that during instantiation, I pass in an interface of IConnectionService type.

2) I can then mock the data directly in the façade layer instead of the ConnectionService layer.

As you might guess, here’s the Unit Test for validating the new façade class.

Here’s an actual usage of the façade layer without mocking data:

There’s a lot more information on Dependency Injection. This post is not intended to deep dive on DI or Mocking rather ensure that when we practice TDD, we should also account for Code Coverage as measure of quality.

Personally, I like to isolate business rules and/or validations outside of MVC Controllers. In this case, API Controllers. I use ActionFilterAttribute to define my checks on parameters being passed in my MVC Web API routes.

Here’s an example of a WebAPI route with parameter binding:

I want to isolate validating employeeid outside of my controller for a couple of reasons:

1) Isolation – You may have multiple cases on validating your parameters. In this case, employeeId can be permutated in different ways specially because it is a string. Other developers can easily get lost on what the action controller is actually doing if you have long code that includes all various validations

3) Testing – I can isolate testing on my controllers vs business rules. This is really the motivating factor for me.

That said, let’s take a look at the ActionFilterAttribute further. For more information on this, see:

(NOTE: There are 2 versions of ActionFilterAttribute)

When unit testing, make sure you’re writing the correct tests for your filter. In this case, I’m using the namespace: System.Web.Http.Filters

Note in the preceding code for the controller that I decorated the web api action method with: [ValidateEmployeeId]

For simplicity, I used MSTest that comes with visual studio.

At this point, you should have separation of code to validate your “validations” vs controller.

Using fiddler, I can see that whenever I submit a request that has an invalid value for employeeid, I get the correct response: